I feel like I’ve committed computer adultery.. I’ve gone and purchased a Mac-Mini. 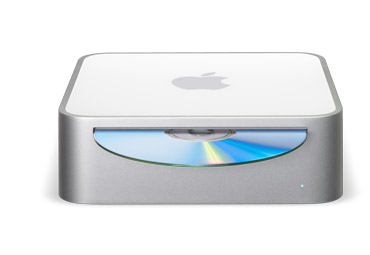 I pushed my wife to get into email and the Internet. She’s not really into technology or computers; she’d much rather have a conversation with someone or meet face to face than to use email as a communication tool. I kept espousing the value of email, how easy it is to keep in touch, how quick it is, how you can search for things on the Internet. She finally bit the bullet and started using Windows XP on an old computer we had. That’s when the trouble started. No sooner had I gotten her connected and she had contacts and relied on the daily communication, the computer started flaking out. First it was the Internet connection itself.. it would just disappear off the network. The printer would stop working for no reason - a reboot would generally fix it. Next it was IE and Outlook Express not working properly, finally the motherboard just died. Each of these problems required me to come in and save the day.

Now mind you, I’m not at all adverse to looking like the hero to my wife, but the problem is that she has now gotten it firmly in her head that technology sucks. You have to be some kind of geek to keep it running. Enter the Mac. I’ve got several friends who proselytize to me constantly about the stability and reliability of their computing platform, how it doesn’t have viruses, how they just leave it running all the time. I’m hoping these claims are true because I’m tired of keeping the computers running here.

So, I go down and buy the thing and bring it home in this ridiculously small box. Unpacked the thing is about the size of two bricks set side-by-side. Incredible. It’s also amazingly quiet. You can’t hear it unless you are using the DVD - unlike the PC tower which sounded like a jet taking off most of the time. Now I know you can get quiet towers, but it’s hard to beat the form factor here - I’ve not seen anything quite like it in the PC world.

The setup was pretty smooth. I plugged in the monitor/keyboard/mouse and then turned it on. It detected my wireless network and even allowed me to connect to the NAS drive I use for backups. I was able to get my wife’s email exported from Outlook Express into the iMail program pretty easily, her address book moved over too. Programs seem slower, especially the DVD installs but overall I’m impressed.

Appearance-wise, OSX is very pretty. The icons are very nice, and I generally like the interface. It’s not too drastically different from XP, although I miss my “tasks” pane which allowed me to do various things without searching through the interface. I introduced it t my wife and showed her how to start Safari, the email program, and Word. That’s pretty much all she needs. Most of the kids games installed onto it (funny enough, little kid games are mostly cross-platform since they use Flash and Quicktime). So far so good.

I have had a couple of quirky things that are unsettling. Starting up multiple programs really bogs the thing down - I presume that’s because it’s a slow G4 with only 512M of memory. I had Finder lock up on me and I had to figure out the CTRL+ALT+DEL equivalent on this machine (OPT+APPLE+ESC for those who are interested). It didn’t recover and I had to power cycle it.. hopefully that won’t be a common occurrence.

I want to try Mono on it and see if I can move some basic .NET code onto the box.. although I’ve found that computers tend to be more unreliable if I keep messing with them.

Here’s hoping that my laptop won’t get jealous and start crashing on me.